Every hike has a starting point. Many are marked with signs inscribed with the word, “Trailhead.”

Jonathan’s trailhead, at least the one I am cognizant of, was somewhat rocky at the outset. He came into the world after a long and arduous labor and delivery. From his first breath the attending nurses looked concerned. He had low muscle-tone, which was the reason his delivery was so difficult, and his doctor and nurses weren’t sure what else might be wrong.

By the time we were ready to leave the hospital, his doctor explained to my husband and me that no one knew what challenges Jonathan might face, but what we needed to focus on was not what might be wrong with Jonathan, but on how much was right.

We took him home from the hospital with one aim—to love him. We cared for him the best we knew how, and we prayed he would surpass his doctor’s prognosis. During his first year, Jonathan endured a barrage of tests to find out if there was a diagnosis that would fit his condition. Nothing concrete emerged. He was simply labeled with “pervasive developmental delays.” We were told Jonathan may never walk, or talk, or even grow for that matter. After all, he was only twelve pounds at one year. 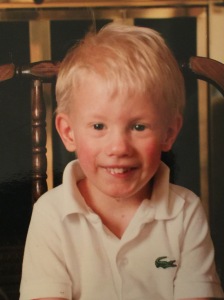 But Jonathan did grow.

And eventually he learned to walk, and even to run.

And now, he hikes—long distances, almost every weekend. 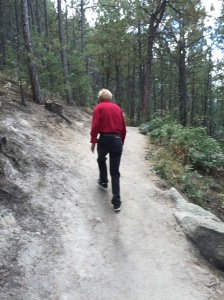 His trailhead started out rocky. But eventually it lent itself to Jonathan’s uphill stride. He walks without a hitch. His gait is steady and confident. He never seems to have a misstep. He is cautious, but not slow or fearful, at least not as long as his feet are firmly planted on solid ground (but that’s for a later blog).

For now, suffice it to say, Jonathan has gone well beyond some of his doctor’s early predictions. He has traversed farther than some thought possible.

3 thoughts on “The Trailhead”